AUTOMATION CONTROLS SO USER-FRIENDLY ANYONE COULD USE THEM 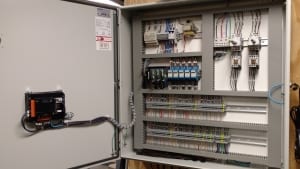 Electronic Control Corporation was hired to engineer and automate a closed-loop Geothermal HVAC control system at the ISKON of Baltimore. A ClimateMaster system had been installed, yet the overall system was not set up and automated to operate properly. This would limit the operational efficiency and electrical control usability, while possibly entering risk if the system was not configured right from the start. ECC-Automation performed further research and additional engineering modifications to start it running at the optimal level. They completely wired the automation control system as well once electricians made the required drops for connectivity.

Geothermal exchange systems utilize thermal properties of the earth to heat and cool buildings. Water is contained throughout the system, including an underground area that allows for the temperature there to maintain a more consistent level. The need for a boiler, as well as noisy outside units that comprise a more traditional HVAC system are eliminated. While costs are considerably higher to install these systems, TCO savings from operational efficiency is realized within a short amount of time.

The closed loop horizontal Geoexchange control system that ECC-Automation engineered and programmed at ISKON of Baltimore utilizes a duplex pump configured for lead / lag, to automatically load and, or failover. Control valves that circulate water from underground gets it pumped in and out of the HVAC system.

Two switches control 1) inside temperature and 2) underground storage temperature, such that when heating, the water leaving is colder and coming back into the system is warmer. When cooling, the opposite takes effect. Temperature and flow switches were installed by Electronic Control Corporation after identifying the need for the system to run at an optimal level. This allows for the monitoring of temperature and flow, two critical elements for pump operation.

Per UL standards: on/off buttons were installed on the outside of the control panel enclosure. This allows for an immediate disconnect of the pumps.

Inside the building, five ClimateMaster tranquility series HVAC units were installed to create one zone each throughout the ISKON of Baltimore: 1) ground floor 2) first floor 3) lobby 4) conference room and 5) yoga room. ECC-Automation automated and programmed the control panel with a user-friendly HMI. Each Geothermal HVAC unit included a Resistive Temperature Detector or RTD that correspond to their corresponding intake vents.

As always, the HMI was programmed with user friendliness in mind. Indicators of operation are displayed, such as heat/cool mode, temperatures, pumps and units. Each zone can be auto-set in terms of shows its own sub-menu; presets for occupied use scheduling are included. This includes manual override settings where each zone can be adjusted for comfort and up to 180 minutes. After that, the system will default to its normal time and temp settings. While the lower layers beyond what the user sees presents some complexity, Electronic Control Corp eliminates this at the user interface. The screen controls follow a nice and easy flow built on many pages of the programmed logic ladder. The goal was to make it so user-friendly that anyone needing to could walk up and manage the system properly.

There are also manual override settings for heating / cooling and the water supply bypass valve. This allows for proper troubleshooting and maintenance repair operations (MRO).

There is an *app now available to control the Geothermal system remotely. This smart tool provides the same interface as the HMI and allows you to completely manage the HVAC controls from anywhere.

Two compressors are contained in the first and second stage HVAC units. The process functions somewhat based on any given moment’s temperature extremes and the Geoexchange system requirements to heat or cool the zone. If more power is needed to bring the zone temperature up or down faster (being indicated by timing the phases of the process), then the stage 2 compressor comes on. Another beneficial part of this 2-compressor process is acting as a failsafe in lead / lag protocol. If the first compressor runs continuously without bringing the temperature up, then the second kicks on automatically.

Another feature of the ISKON Geothermal HVAC system is the ability to utilize the underground temp around the system if this temp is closer to the required indoor temperature. For example, if needing to cool a zone, the system can check the underground temp then use it through an ECC automation process that opens an outside damper and turns on a fan to bring that cooler air in before using more resources of the electrical – mechanical controls of the system to do the job.

BRINGING IT ALL TOGETHER

Many projects like this one tend to get piecemealed together during some point in the building design process. However, they lack the cohesiveness of a top-level control system that considers how the whole system must operate; and, at peak performance. Electronic Control Corporation offers its design & engineering expertise for bringing together all aspects of the industrial, electrical, mechanical to produce cutting edge automation control systems. Programming a complex logic ladder while offering the most user-friendly control screens possible comes standard on their every project.